The Myth of Pure Evil 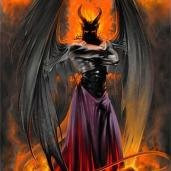 Of the many things that preclude me from becoming a Christian, one of the top ones is my belief, in the mainstream of Buddhism, that differs from Christians' belief in Absolute Evil.

John Haidt, in The Happiness Hypothesis: Finding Modern Truth in Ancient Wisdom, borrowing from Roy Baumeister's Evil: Inside Human Violence and Cruelty tags the issue exquisitely. Basically, the matter relates to people's ego-nature where we see the mote in others' eyes but not the beam in our own as Jesus said, [Matthew 7:3-5], or, as Buddha said [in the Dhammapada, verse 252], "A man broadcasts the fault of others like winnowing chaff in the wind, but hides his own faults as a crafty fowler covers himself."

Baumeister examined evil from the perspective of both victim and perpetrator. ... The disturbing part is that Baumeister shows us our own distortions as victims, and as righteous advocates of victims. Almost everywhere Baumeister looked in the research literature, he found that victims often shared some of the blame. Most murders result from an escalating cycle of provocation and retaliation; often, the corpse could just as easily have been the murderer. In half of all domestic disputes, both sides used violence.

... Baumeister is willing to violate the taboo against "blaming the victim" in order to understand what really happened. People usually have reasons for committing violence, and those reasons usually involve retaliation for a perceived injustice, or self-defense. This does not mean that both sides are equally to blame: Perpetrators often grossly overreact and misinterpret (using self-serving biases). But Baumeister's point is that we have a deep need to understand violence and cruelty through what he calls "the myth of pure evil." Of this myth's many parts, the most important are that evildoers are pure in their evil motives (they have no motives for their actions beyond sadism and greed); victims are pure in their victimhood (they did nothing to bring about their victimization); and evil comes from outside and is associated with a group or force that attacks our group. Furthermore, anyone who questions the application of the myth, who dares muddy the waters of moral certainty, is in league with evil.

Outside of children's cartoons and horror films, people almost never hurt others for the sheer joy of hurting someone. The two biggest causes of evil are two that we think are good, and that we try to encourage in our children: high self-esteem and moral idealism. Having high self-esteem doesn't directly cause violence, but when someone's high esteem is unrealistic or narcissistic, it is easily threatened by reality; in reaction to those threats, people - particularly young men - often lash out violently.

Update 5/19: Whoa. Found a blogpost with the same title as this one, that also uses Haidt's book as the source of the write-up, but, sigh, does a better, different, more-interesting job of discussing the same material. Read "The Myth of Pure Evil," posted 10/27/08 in the blog spicy lifestyle network.
written by Unknown at 5/16/2009 01:40:00 PM

Hey, great post. I'm trying to write a creative piece discussing the victimisation of victims of sexual assault and this is really useful.

Thank you, tullfrog, for your comment from over two years ago.

And kind springismylove: Thank you for making known your blog post from a month-and-a-half ago [I will get into it tomorrow] and for the backtrack.